Henry Ford famously said: “If you think you can do a thing or think you can't do a thing, you're right”. Time and time again we see how peoples’ beliefs affect their behaviour. We often influence the outcome of an event because of our attitude going into it. And it doesn’t stop at our personal lives. The beliefs we take into our workplace are just as self-fulfilling, whether it’s negotiating a deal, making a cold call or trying to win a pitch.

Take two sales people with different attitudes towards the product that they are selling and the outcome of the encounter they are about to have with a potential buyer. Let’s call them Negative Norreen and Performance Pete. They both work for a mobile phone company called Marvellous Mobiles, selling plans to new customers and upgrading the deals of existing customers.

Negative Norreen is used to rejection. But she thinks she understands the reason: Marvellous Mobile’s call rates are amongst the highest on the market. How can she possibly sell phone deals when her competitors undercut the price? Not only that, Marvellous Mobile’s is an internet company, so customers can’t even go into the store to talk to anyone.

Negative Norreen believes that she is not good at sales anyway. She reasons that she has never been as chatty and extraverted as she imagines a good sales person should be. She rarely makes the cold calls, and she doesn’t bother too much with the targets she is set. She knows she won’t make them, so she just does her job and goes home. 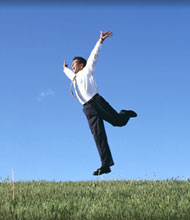 Performance Pete thinks everyone should get their phone from Marvellous Mobiles. Yes, the call rate is more expensive than its competitors, but it’s worth it, because Marvellous Mobiles has the best coverage and exclusive access to many of the latest handsets. There are no stores, but Marvellous Mobiles guarantees that when you call their help line you will talk directly to an actual person, not a computer. It’s innovative, he thinks, getting rid of the physical store and replacing it with a virtual one.

Performance Pete is excited about the product he sells, and this is passed onto the customer. He isn’t an outgoing person either, but he listens to customers. He works out what they want and sells them the best mobile for their needs. He doesn’t always make the sale, but it’s not a failure. The customer may buy in the future, he thinks, or they have their own reasons for not wanting a deal right now. Performance Pete thinks his targets are realistic, and is motivated to meet them. Although he finds cold calling challenging, he knows it does lead to sales.

Attitudes to selling can be changed. One effective method is by challenging the beliefs that sales people have. For example, if a sales person thinks, like Negative Norreen, “The product is too expensive”, then the first issue to address is whether it’s a fair comment: expensive compared to whom? And if it’s true, why is it more expensive? What are customers getting for the extra cost? There are probably good reasons customers should pay more for the product. And if she thinks she “fails” every time she gets rejected then this will cause her to lose confidence in her own ability.

Self-confidence plays a significant role in making sales. A sales person who believes they will succeed will do so more than one who sets him or her self up for failure. And if they fail, self-confidence and a rational view of not making the sale will give them the resilience to keep going.

We can help you

Your sales team could be restricting its performance because of the self-limiting beliefs of its members. AttitudeWorks can help your people build the essential skills for succeeding in sales. We are experienced in increasing self-confidence, optimism and resilience.

So if you want to change the attitudes of your people and get them to focus on the high pay-off activities that lead to sales, we can provide training and coaching that is tailored to suit your needs.

Find out more about how attitudes affect performance here.